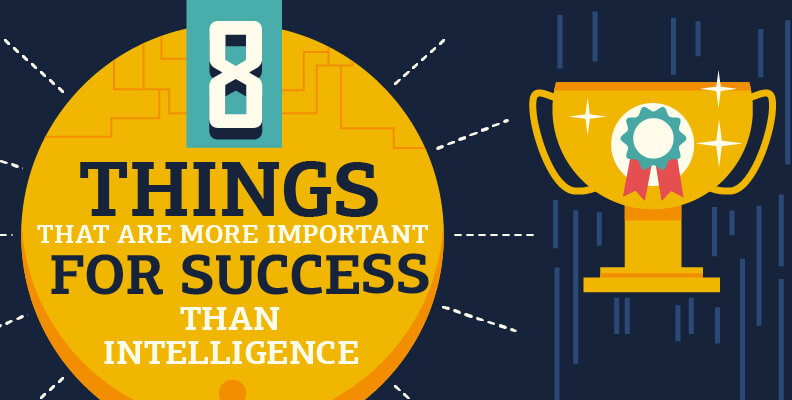 8 Things That Are More Important for Success than Intelligence

When it comes to academic achievement, intelligence is an important factor. In fact, we are often led to believe that the only way to succeed is to be blessed with an exceptional IQ. However, research has found that while intellect is a significant factor in predicting success, it is certainly not the only — or even the most important — one. Recent studies have shown that emotional intelligence is actually a greater indicator for achievement in both academia and life than intellect.

The term IQ — or intelligence quotient — was first coined by a German psychologist named William Stern in 1912. Since then, standardized intelligence tests have been used worldwide to compare the test taker’s score to the scores of other people in the same age group, resulting in a figure that determines how academically gifted they are. While IQ is still recognized as an important element of success, particularly when it comes to educational achievement, researchers and psychologists alike have discovered that EQ — more commonly known as emotional intelligence — is far more likely to lead to overall success than a high IQ or relevant experience.

According to Dr. Steve Bressert, when considering the ingredients for success, IQ counts for roughly 10% (and at best 25%), while the rest depends on everything else, including EQ1. Dr. Arthur Poropat of Griffith University’s School of Applied Psychology’s research also supports Bressert’s claim; by comparing measurements of the “Big Five”personality traits2 — extraversion, emotional stability, agreeableness, conscientiousness and openness to experience — to college students’ grades and test scores, Poropat discovered that students with higher levels of openness and conscientiousness were four times more likely to be successful and achieve higher grades on tests.

Moving away from academia and into business, research from the Carnegie Institute of Technology3 found that 85% of financial success is generated from people skills while only 15% of financial success is due to technical knowledge. And, according to Nobel Prize winning Israeli-American psychologist Daniel Kahneman, people much prefer to do business with someone they like and trust, rather than someone they don’t3 — even if that person is offering a better product at a lower price.

Many employers are now actively seeking candidates with exceptional EQ skills, including conscientiousness and openness. This is not surprising, considering that people who are open to experience are more likely to be imaginative, sensitive to their feelings and intellectually curious, while conscientious people are disciplined, compliant and excellent at planning ahead. And these are not the only two personality traits that are deemed more important for success than intelligence.

So, for those of us who struggled in a classroom setting, and were not born with the gift of a genius level IQ, there is no need to fear. Despite there being little evidence to suggest that intelligence can be taught, personality traits, on the other hand, can be developed, strengthened and enhanced. Read our full infographic to learn more about 8 traits that will enable you to be just as — if not more — successful than any of your brainbox competitors.

Do you feel that funding is hindering your success? A small business loan may be your option.

Bradberry, T. (2015). Why attitude is more important than intelligence. entrepreneur.com

Gregoire, C. (2015). Why personality is a better predictor of success than intelligence. huffingtonpost.com