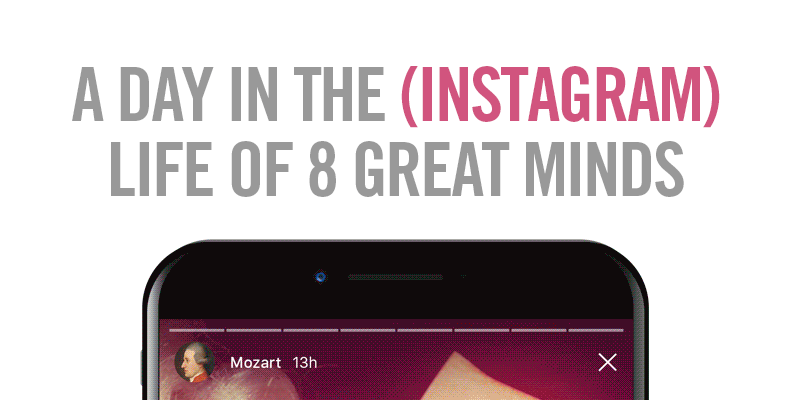 The Daily Routines of 8 Great Minds as Instagram Stories

Social media has opened up the lives of the creative minds of our time, revealing personal insights into how they spend their days and where their inspiration comes from. But what about the great minds of decades past? Ever wondered how Darwin started his morning, or how Louis Armstrong decompressed after a show?

Hemingway was famed for his laconic take on some of life’s most interesting questions, often incorporating the places he visited through his well-traveled life. But like any great author, inspiration was just part of the process – it was his consistent production and dedication to creating the perfect sentence that made him a literary giant of the 20th century.

Hemingway preferred to be up early to work in the silence of the morning – and his whole day’s work might be dedicated to a single sentence. Each day he’d record the number of words he wrote on a cardboard chart affixed to his wall. Then, the famed fishing fan would take his boat into the Straits of Florida before relaxing with a well-earned drink on his Havana verandah.

The most famous early proponent of evolutionary theory, Darwin was quite a relaxed home-bird once his great scientific adventures aboard the HMS Beagle were finished. An archetypal English gentleman, he would wake early and have a brisk walk around the garden with his dog. This was followed by a regimented four-hour working day until 12:15 pm, a time after which he believed no great work was possible.

The rest of his day was spent relaxing and reading with his wife, before heading to bed relatively early at 10 PM. Unfortunately, however, he was a fitful sleeper, blaming an abundance of important thoughts that he couldn’t wait to write down.

While some rely on strict regimes and discipline to produce their desired work, Mozart’s life was more of a whirlwind of activity. Juggling a teaching post, composing, playing concerts, a healthy social life and a rather obsessed love life, it may come as a surprise that he managed to create over 600 compositions before his untimely death at 35.

His secret was an abundance of creative energy, which saw him rising at 6:00 am every morning to have his hair done and continuing to work (and play) until 1:00 am the next morning. In that time he managed to compose, teach, socialize and – sometimes – give a concert in the square. It’s not an easily replicable working strategy, but for those who can handle it, perhaps greatness awaits.

It’s been said that Immanuel Kant’s life history is impossible to recount, since he had neither a life nor a history. But the German philosopher simply preferred to live a methodical, regular life and focus most of his energy on his work.

This saw him being woken up at 5:00 am every morning – a fact of which he was very proud – to a cup of tea and his pipe. He followed a strict routine of writing and teaching, before taking an evening walk with friends and tucking in for the night at precisely 10:00 pm. His neighbors got used to his regime, and legend has it that people in 18th century Königsberg used to set their clocks by his movements.

While many musicians have a hell-raising reputation, it often hides a dedicated commitment to self-care that prolongs their career. One of the longest-lasting and most committed to this ideal was Louis Armstrong, whose magnificent jazz playing spanned five decades.

He loved performing and wanted to do it for as long as possible. Armstrong arrived at his shows two hours early to prepare, part of which included concocting his own honey and glycerin mouthwashes to keep his “pipes clean.” While not averse to living a wild life at times, after his shows he generally preferred to turn in early with a box of Chinese takeout, watch some TV and prepare himself for the next performance.

Austen’s most productive period came when she was settled with her mother, sister, a close friend and three servants at a small cottage on her brother’s estate, Chawton House. Her established routine involved waking up before the others to practice piano and organize breakfast, after which she was free for the day.

As she didn’t want anyone outside her family to know she was an author – it was considered improper for a lady of the time – Austen wrote on small scraps of paper and insisted that the creaky hall door not be fixed. The sound warned her of unexpected visitors and afforded her time to hide her work. After an early dinner she enjoyed socializing with her family, even reading aloud her work from the day.

A prolific and ingenious artist throughout his 70-year career, Picasso was insistent on being able to keep to his schedule. A later riser, he would wake near noon and spend afternoons locked in his studio, with only his many pets for company.

Picasso was an intense character who found it difficult to take his mind off work, even when eating or having guests over. As far as he was concerned, these things only kept him from his work. It’s said that the egomaniacal Picasso even came to an arrangement with his friends whereby they would all visit him on Sunday, so that there would be no need for him to waste time seeing them during the week.

The father of psychoanalysis, Freud was completely consumed by his thoughts and practice. To ensure as little as possible would disturb him from these, his wife would lay out absolutely everything he needed each day – even putting toothpaste on his toothbrush. When he woke at 7:00 am, he only needed to worry about getting his beard trimmed before seeing patients.

Freud often spent more than 10 hours a day seeing therapy clients, which must have given him plenty to think about. It’s no surprise, then, that his main daily physical outlet was power walking at a great pace around the streets of Vienna – so fast, in fact, that friends and family often got out of breath trying to keep up with him. He then returned home – likely out of breath – to eat, catch up on politics and finish some work.

A quick flip through your own Instagram Stories feed will no doubt give you some insight into the day-to-day lives of the people you follow. Though the greatest minds of history are often put on a pedestal, a look into their daily regimens confirms that they were still normal people doing everyday (and perhaps extraordinary) things.

If you’re looking for inspiration for your own life, why not look to emulate the daily routines of some of the most creative people the world has ever known?